Post-mature oocyte is the result of follicular disintegration that took place before ovulation trigger administration.

You almost certainly have heard about post-mature eggs and perhaps even seen a couple, but never seen a definition for it. This is because to the best of my knowledge it was never due to an unknown origin.  My hypothesis of its origin, below, calls for the following way to define it:

The post-mature oocyte is an egg that exhibits signs of intrafollicular degeneration at the time of recovery from the ovary and maybe at the GV, MI, or MII stage.

Post-mature oocytes are usually found in patients with well suppressed LH, which indicates that they are the result of local and not systemic factors. The absence of systemic influence can further be substantiated by observations that only a single egg (or at least a minority of eggs) in the retrieved cohort will have the features of post-mature oocytes, whereas systemic factors would be expected to result in post-maturity of the majority of eggs. The cumulus of the post-mature oocytes is also distinctively different from that of normal oocytes with follicular cells having a distinctive degenerating morphology.

P4 in patients with post-mature egg is often elevated, sometime considerably and disproportionately to the number of the follicles. Under normal circumstances, each follicle toward the end of follicular phase contributes about 0.1 pg/L to the level of systemic progesterone. It would therefore be expected in a patient with 20 follicles to observe progesterone level of about 2 pg/L. However, in patients with post-mature oocyte, P4 level can be as high as 12 pg/L in the presence of only 4 or 5 follicles. 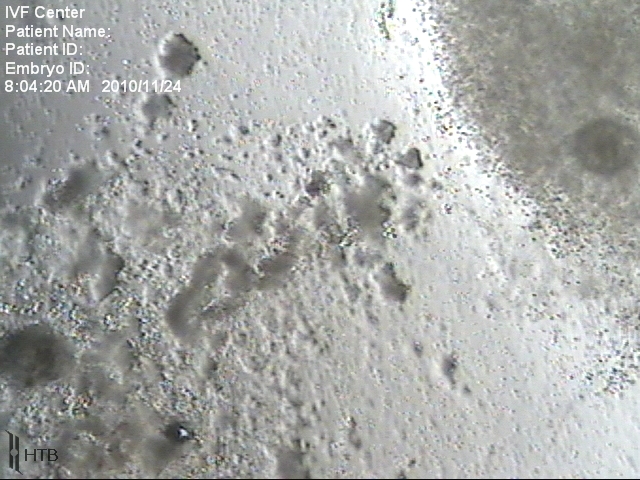 In summary, a local (follicular) catastrophic event in one of the leading follicles that take place prior to hCG administration results in degeneration of cumulus cells, which leads to the resumption of meiosis in the oocyte that will have a post-mature appearance at the retrieval.

It is important to note that the affected follicle itself apparently persisted (since it could be aspirated), despite its content undergoing degenerative changes.

The link between premature luteinization and post-mature egg

The cumulus of post-mature oocytes exhibits signs of apoptosis rather than luteinization and usually, only a single egg in the cohort is affected. Therefore premature luteinization, which is caused by systemic factors can be ruled out, particularly because the premature elevation in LH is usually not observed in such patients. While the level of LH in these patients is normal, P4 may be elevated due to luteinization of some granulosa cells within the follicle with premature egg. This luteinization is spontaneous and apparently LH independent.

Vanishing follicles – follicles that spontaneously disappear during ovarian stimulation is a well-established phenomenon. It is particularly common in older patients, even though this may simply be due to the fact that in older patients it is easier to observe since the total number of follicles is small. In simple terms, those vanishing follicles simply “pop” when they reach a certain size, without any apparent help from any systemic hormones. This creates a possibility that they “pop” for simple mechanical reasons. Indeed, during the follicular phase, the volume of the follicle increases about 10 times. The surrounding tissues have to exhibit a considerable elasticity to accommodate such expansion. Furthermore, since the follicle is “local”, its expansion can be affected, for example, by ovarian scars from prior ovulations. Also, elasticity can vary from site to site and is probably lost with aging. Also, elasticity would be expected to vary from patient to patient.

Therefore, it is possible that some follicles originate from the area of the ovary where elasticity is lower and as its limit is reached, the follicle pops completely or, may lose its blood supply, in which case it would not pop, but persist, while its content, granulose cells die, triggering pathological oocyte maturation.

Since post-mature oocyte is apparently a local event, triggered at the level of the follicle, it is only affecting the potential of post-mature eggs, but no other eggs in the cohort.